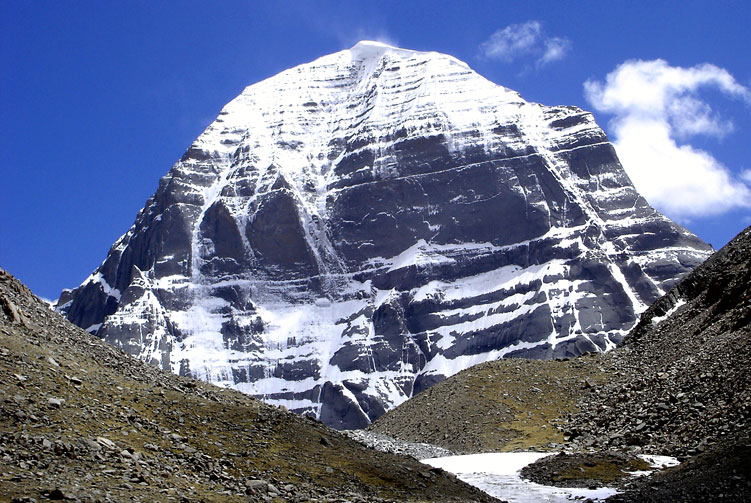 Mount Kailash(6714m), the famed holy peak in west of Tibet. Mt. Kailash has long been an object of worship for four Major religious, for Hindu, it is domain of Shiva, It is also the abode of samvaraa multiarmed, wrathful deity worshipped in the chakrasamvara Tantric cycle of Tibetian Buddhism. And in the ancient Bon religion of Tibet, Kailash was the secred nine storeys Swastika Mountain, upon which the Banpo founder Shenrab alighted from haven. The 53 Km. Kailash Circuit is the holist of all-Hindu as well as Buddist pilgrimages and the beacon, which draws most traveller to western Tibet. It is said that a single Parikarma erases the accumulated sins of a lifetime, while 108 cicurmbulation will achieve Salvation.

Lake Mansarovar: Sprawling below Mount Kailash is the sacred lake Manasarovar (4580m), where ritual bath will deliver a pilgrim to brahm's paradise and drink of its water relinquishes the sins of a hundred lifetimes.

Mount Kailash is a peak in the Kailas Range (Gangdisê Mountains), which forms part of the Transhimalaya in Tibet. It lies near the source of some of the longest rivers in Asia: the Indus River, the Sutlej River (a major tributary of the Indus River), the Brahmaputra River, and the Karnali River (a tributary of the River Ganga). It is considered a sacred place in four religions: Bön, Buddhism, Hinduism and Jainism. The mountain lies near Lake Manasarovar and Lake.

According to Hinduism, Lord Shiva, the destroyer of ignorance and illusion, resides at the summit of a legendary mountain named Kailās, where he sits in a state of perpetual meditation along with his wife Pārvatī. Like many of the Hindu gods, Shiva is a character of apparent contradictions. He is at once the Lord of Yoga and therefore the ultimate renunciate ascetic, yet he is also the divine master of Tantra.

According to Charles Allen, one description in the Vishnu Purana of the mountain states that its four faces are made of crystal, ruby, gold, and lapis lazuli. It is a pillar of the world and is located at the heart of six mountain ranges symbolizing a lotus.

In Jainism, Kailash is also known as Meru Parvat or Sumeru. Ashtapada, the mountain next to Mt. Kailash, is the site where the first Jain Tirthankara, Rishabhadeva, attained Nirvana/moksa (liberation).

Tantric Buddhists believe that Mount Kailash is the home of the Buddha Demchok (also known as Demchog or Chakrasamvara), who represents supreme bliss.There are numerous sites in the region associated with Guru Rinpoche (Padmasambhava), whose tantric practices in holy sites around Tibet are credited with finally establishing Buddhism as the main religion of the country in the 7th–8th century CE.

It is said that Milarepa (c. 1052-c. 1135 CE), champion of Tantric Buddhism, arrived in Tibet to challenge Naro Bön-chung, champion of the Bön religion of Tibet. The two magicians engaged in a terrifying sorcerers' battle, but neither was able to gain a decisive advantage. Finally, it was agreed that whoever could reach the summit of Kailash most rapidly would be the victor. While Naro Bön-chung sat on a magic drum and soared up the slope, Milarepa's followers were dumbfounded to see him sitting still and meditating. Yet when Naro Bön-chung was nearly at the top, Milarepa suddenly moved into action and overtook him by riding on the rays of the sun, thus winning the contest. He did, however, fling a handful of snow on to the top of a nearby mountain, since known as Bönri, bequeathing it to the Bönpo and thereby ensuring continued Bönpo connections with the region.

The Bön, a religion which predates Buddhism in Tibet, maintain that the entire mystical region and the nine-story Swastika Mountain are the seat of all spiritual power.

The climate of Nepal varies depending on the altitude of the area visited. A visist to Nepal is possible all the year round, but activites such as mountain flights, jungle safaris, rafting and trekking are best done from October to May.

Every year, thousands make a pilgrimage to Kailash, following a tradition going back thousands of years. Pilgrims of several religions believe that circumambulating Mount Kailash on foot is a holy ritual that will bring good fortune. The peregrination is made in a clockwise direction by Hindus and Buddhists. Followers of the Jain and Bönpo religions circumambulate the mountain in a counterclockwise direction. The path around Mount Kailash is 52 km (32 mi) long.

Some pilgrims believe that the entire walk around Kailash should be made in a single day, which is not considered an easy task. A person in good shape walking fast would take perhaps 15 hours to complete the 52 km trek. Some of the devout do accomplish this feat, little daunted by the uneven terrain, altitude sickness and harsh conditions faced in the process. Indeed, other pilgrims venture a much more demanding regimen, performing body-length prostrations over the entire length of the circumambulation: The pilgrim bends down, kneels, prostrates full-length, makes a mark with his fingers, rises to his knees, prays, and then crawls forward on hands and knees to the mark made by his/her fingers before repeating the process. It requires at least four weeks of physical endurance to perform the circumambulation while following this regimen. The mountain is located in a particularly remote and inhospitable area of the Tibetan Himalayas. A few modern amenities, such as benches, resting places and refreshment kiosks, exist to aid the pilgrims in their devotions. According to all religions that revere the mountain, setting foot on its slopes is a dire sin. It is claimed that many people who ventured to defy the taboo have died in the process It is a popular belief that the stairways on Mount Kailash lead to heaven. 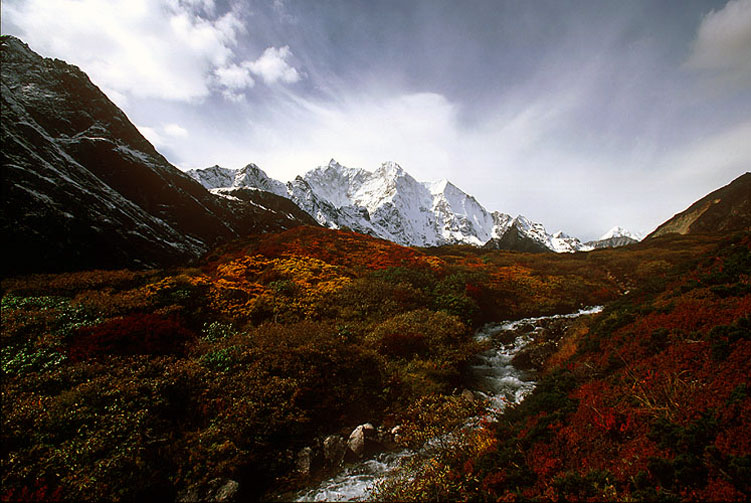 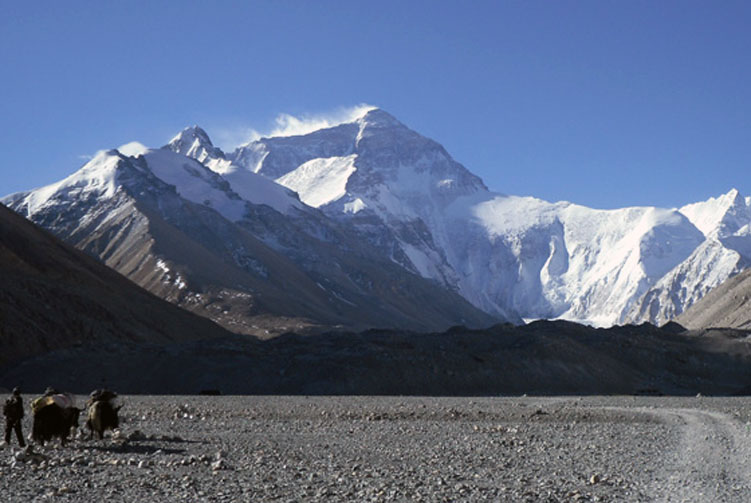 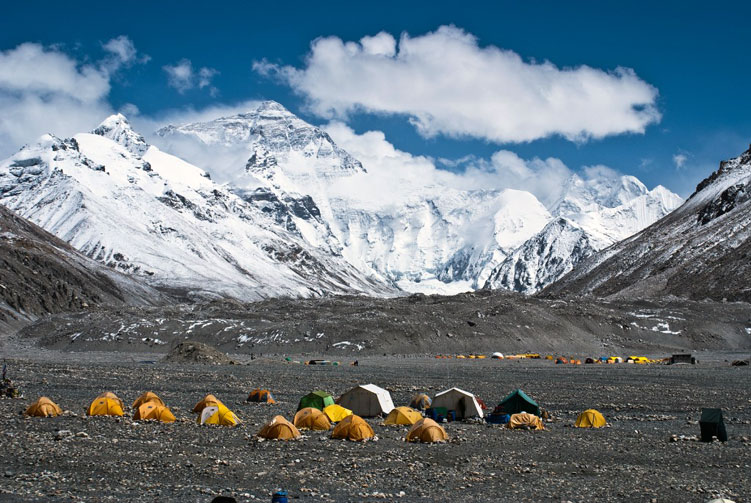 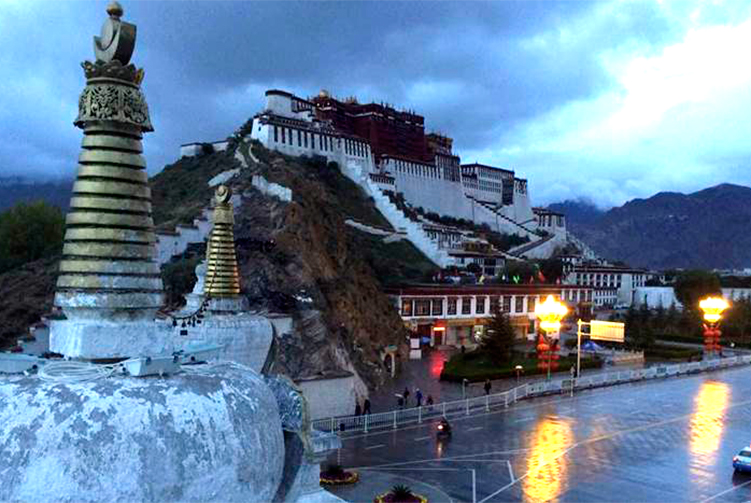