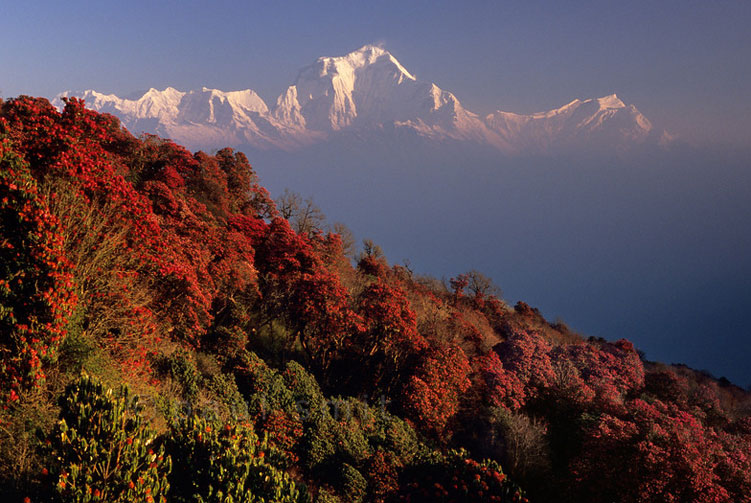 The Dhaulagiri Expedition is a tough proposal for mountaineers at any time. Its name is derived from the Sanskrit 'Dhaula' meaning white and 'giri' meaning mountain. The mountain was sighted by British surveyors in India in the early 1800s and was mapped by one of the secret Indian surveyors, the pandits, in 1873. However, the region remained largely unknown until a Swiss aerial survey in 1949. The French Annapurna expedition in 1950 had permission to climb either Annapurna or Dhaulagiri, but decided on Annapurna after a reconnaissance of Dhaulagiri. A Swiss party failed in 1953, as did an Argentine group one year later.

Eight members of a Swiss expedition finally reached the summit in 1960, after four other attempts. The climbing route went around the mountain from Tukuche, over Dhampus pass and French Col, approaching the summit from the Northeast Col. The expedition was supplied by a Swiss Pilatus Porter aircraft, called the 'Yeti' which landed on the Northeast Col (5977m). Near the end of the expedition the plane crashed near Dhampus pass and the pilots, including the famous Emil Wick, walked down the mountain to Tukuche. In 1969 an avalanche killed seven members of a US expedition on the East Dhaulagiri Glacier. In 1973 the Americans were successful. Again Captain Emil Wick airdropped supplies to the expedition, including two bottles of wine and a live chicken. However, the Sherpas would not allow the chicken to be killed on the mountain. It became the expedition pet and was carried, snow-blind and crippled with frostbitten feet, to Marpha. It finally ended up in the cooking pot.